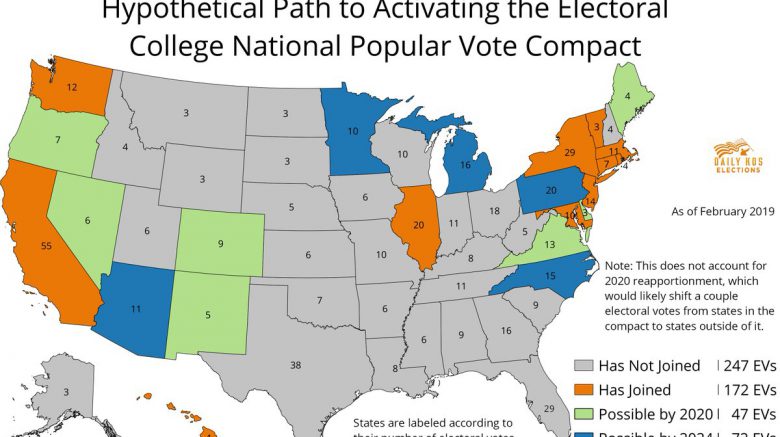 Electoral Reform is one of the most prevalent issues in American politics today. More and more Americans are beginning to rightfully believe that our system is not perfect, and that it can and should be changed. I agree with this, but not to the same extent many others do.

One of the pressing ideas regarding electoral reform is abolition of the Electoral College. Proponents claim that it will allow the people’s voice to be more accurately heard, while opponents claim that it will lead to a few key states controlling entire elections. These arguments both have merit, and I’ve previously sided with those who support abolishing the institution. Though, that was until I discovered the National Popular Vote Interstate Compact (NPVIC).

The National Popular Vote Interstate Compact is an unofficial union (as of May 2019) including 14 states and the District of Columbia, who have pledged to give their electoral votes to the winner of the national popular vote, ensuring that the people’s decision is ultimately respected, regardless of the state by state result. It is worth noting that the pact only goes into effect when the number of electoral votes affected reaches 270. Currently, just 189 Electoral Votes are in States with enacted NPVIC laws.

British hero & humanitarian Sir Nicholas Winton once said “Never forget that compromise is not a dirty word,” which perfectly describes the NPVIC. In fact, I would go as far as to say the NPVIC is one of the best compromises in American History, and the reason why is simple.

The NPVIC, perhaps more than any other electoral reform measure introduced over the years, truly represents the best of both worlds. It keeps the institution of the Electoral College, but also ensures that the majority’s opinion is represented in the outcome of the election, something the Electoral College has not always been able to deliver.