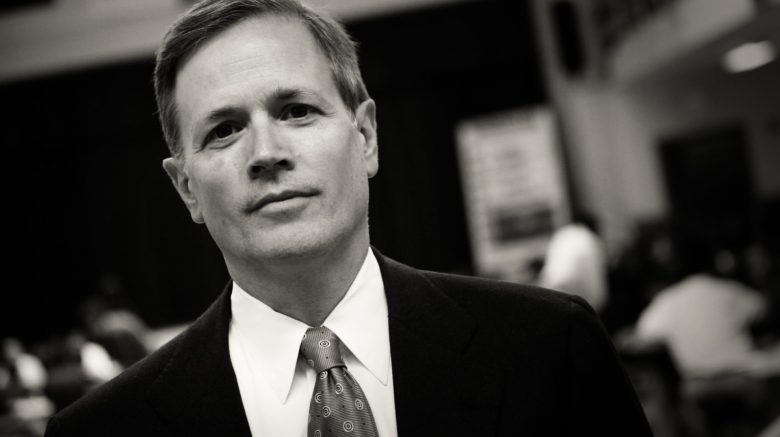 Please note that this interview has been lightly edited for clarity.

As part of our ongoing series on education reform, we interviewed Massachusetts Secretary of Education, Jim Peyser. Before his appointment by Governor Charlie Baker, Peyser served as an education advisor to Governers Bill Weld, Jane Swift, and Mitt Romney.
Onto the interview!

A: My name is Jim Peyser. I am the Secretary of Education and have been for almost five years. I have been working in the field of education for 26 years now, going back to 1993. I started working at a think tank where I started a research center for charter schools. While I was working at this organization, I joined the Board of Education — which has now become the Board of Elementary and Secondary Education — became Chair in 1999, and was Chair until 2006. I was on the board for about 10½ years, and I was Chair for about seven. During that time I was also the Junior Education Advisor to Governor Jane Swift and then an education advisor to Mitt Romney for a year. From there I went to an organization called NewSchools Venture Fund, which is a non-profit grant-making organization working with education entrepreneurs in large urban centers.

Q: The next question is one we ask everyone we interview: what does the word “progress” mean to you?

A: In the context of education — as opposed to a broader definition — I think it is primarily ensuring that we continue to get better as a public education system, that a higher and higher percentage of students are learning at a level that prepares them for success in college and beyond, and that we are making steady progress including achievement gaps among different communities across the state.

Q: So, we all know that Massachusetts is the top state in America when it comes to education.

Q: What are we doing right?

A: I think there are few things — going back to at least back to 1993 — from a policy point of view, some of the things we have been doing right are that we put in place strong academic standards, developed assessments that fairly and accurately measure student learning, and created accountability systems to ensure that we are holding ourselves — adults in particular — accountable for providing students with not only access to a strong curriculum but to effective teachers as well to ensure that student learning is keeping pace with the expectations of those standards, with particular focus around preparing young people for college and careers. Equally important to establishing standards and systems of assessment accountability are providing sufficient resources to ensure that schools have what they need, both in terms of teachers and tools/materials, to give students the kind of learning that they need in order to be prepared for success. At the end of the day, as much as policies and resources matter, Massachusetts is the leading state in the country when it comes to education because we have the best teachers.

A: I should amend that given who I’m talking to — we have the best students too, but they are guided by the best teachers.

Q: What do we — both as a state and as a nation — need to do to improve our public education system?

A: Well it’s not a simple answer, and I am not sure that anyone really has even the complicated answer. But I think there are a few things that are important for us to do — which we in Massachusetts are doing a little bit better than around the country. One is continuing to kind of stay the course around high standards, meaningful and accurate measurements of achievement and school performance, continuing to hold adults accountable for results. Having said all that, I do think we need to do quite a bit more in order to empower educators at a school level to make decisions to treat the school units as the most important place for change to happen, and where sustainable change can happen that can lead to better outcomes by giving the teachers, educators, and school leaders in those buildings the kind of responsibility and ownership for making decisions, allocating resources, and designing programs and schedules that best fit and suit the needs and interests of the students who they’re serving.

Q: What do you think about the demand for alternatives to traditional education?

A: I think as long as we are continuing to hold steady expectations for what we expect students to, the way we deliver it is kind of less important. It gives us the opportunity to have more diverse kinds of schools, educational strategies, and more diverse curriculum in order to say what we care about is how much students learn and how quickly or how well they advance, not how the instruction is actually delivered. Some of that has to do with the design of schools — for example, the charter school versus the district school, vocational school versus more traditional comprehensive high school. But even within the context of those different structures, you have different ways of delivering instructions through technology through more hybrid strategies as well more untraditional ways of engaging students and delivering instruction through a teacher or an educator. So, all those things and more I think are not only acceptable but desirable as long as they are aligned to and ultimately evaluated by the extent to which they are delivering results for young people.

Q: Something that we’ve seen quite a lot lately — especially on the national level — is a growing debate over the student loan debt crisis. What is your stance on this?

A: Well I think there are a things. One is that the amount of student debt — which obviously has been growing significantly over the course of several decades — is in large part a function of the cost of higher education, so I think we need to be reevaluating how we are delivering higher education and trying to find new methods — in some ways getting back to what we were talking about before in the K-12 world but especially in this case in the higher education domain — finding new ways of delivering instruction that is lower-cost, more accessible, and more flexible because, well, the cost is part of the problem. The second thing is creating pathways so that students aren’t wasting their time taking courses and accumulating expenses and debts that may not be leading them — especially in an efficient way — towards their ultimate goal of credential. The biggest challenge in many ways here is not so much the cost of the credential but the fact that half the students who embark on a degree program don’t finish it. So, again, it’s certainly the cost of the degree and the cost of the debt that they may incur, but it’s doing that in service of getting a degree that really matters — and if that doesn’t happen if they don’t finish — then it’s a double whammy. Finally, I think that, in the use of financial aid or the way in which we fund financial aid, we need to be more strategic and invest more in financial aid for students. To ensure that they are not just getting sort of a little of that allows them to proceed for the next semester, but ensuring that they are getting the resources that they need in order to finish the job and earn a degree. One other thing I’ll say about the overall picture is that the large majority of debt is by students and families who have higher income levels and higher — which is not to say that the burden is not significant for families and lower — but when you look at the overall debt levels, it’s sometimes a bit misleading because so many of the students and families who incur that debt are of relatively families with students who have earnings — once they get out of college — that are actually pretty significant relative to the debt that they incurred.

Q: You had mentioned something about creating college pathways. Could you elaborate on that a bit?

A: By way of example, it’s something that we had put in place a couple of years ago called the Commonwealth Commitment whereby students begin their college experience at a community college, earn their associate’s degree, and transfer to any public four-year institution to complete their bachelor’s degree. If you do that, and if you go mostly full-time and maintain a B average, you can earn your college degree for $30,000, or in some cases, less — and that’s before financial aid. When you put financial aid into the mix, which averages about $15,000 per student counting federal and state resources, then for students who qualified for financial aid that could be a $15,000 four-year degree. One other example is early college. Early college means that you get a pathway that begins in 9thor 10thgrade that is specifically designed around a cohort of students to prepare them for success in college and includes the earning of at least 12 credits before you graduate high school at no cost. There have been some parts of the country where students are coming out of high school and out of early college programs with full associate’s degrees. Trying to better integrate high school with college to give students a head start on their college experience is another way of reducing costs.

Q: What is happening in the state government in regards to education right now?

A: A big thing that is happening now is a school finance bill that is pending. It just passed the Senate last week and it is probably going to come to the House within a couple of weeks. It would add another $2B to what is called the Chapter 70 program, which is the state program that provides local aid to school districts, which currently is about 5.2 billion dollars and it would go up to 7.3-7.4 billion dollars. The formula would be changed so that a higher percentage of state resources would go to lowest-income school districts.