Home > Articles > How “The Lorax” is predicting society’s path: an environmental overview/call to action 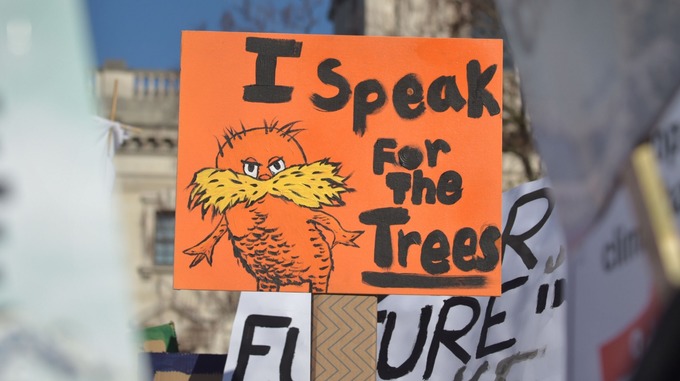 The original Lorax, perhaps the most well known cartoon of the seventies, stole the hearts of children and adults alike. Though, while this animated television special was beloved by all its viewers, the true meaning behind it is startling to say the least.

In reality, the film depicts an isolated society that ruined itself at the hands of greed and power. We see the Once-ler, a self-made manufacturing mogul, continually over harvest the area’s endemic Truffula trees…thereby displacing the colorful Humming fish, Swanee swans, and numerous others. The environment is left rotten and destroyed, through his company’s unsustainable manufacturing practices and their overall depletion of natural resources.

While this Dr. Seuss adaptation may seem like a silly take on business, our society functions with the same exact direction and purpose. Mankind’s very own ‘Once-lers’ are pushing the global climate up to a near irreversible level, kicking species out of their niches to develop and harvest resources, and are detriments to nearly every natural food chain known to man. Whether it be mangrove forests in Thailand or a chaparral biome in California, humans are and will continue to disrupt earth’s ecological cycling.

Now, why isn’t this a fixable problem? It comes down to two words: anthropocentric bias. Earth’s instability is due to individuals in society that choose money and power over sustainability. However, ignorance is largely harbored by lack of understanding. Large-scale agricultural companies may not choose drip or laser irrigation systems for their crops, since these installations can easily reach $2,000 per acre. Using a less-proficient watering method, and thereby harboring water runoff, unsustainable aquifer depletion, etc. seems better comparatively to a method that directly charges you more. Seems logical, right? Well, when water usage in agriculture translates to 70% of the world’s total water supply, it becomes an issue that affects people in water shortage areas and beyond.

Anthropocentrism, a self-centered mindset, poses a real issue in passing protective policy, stabilizing funding for the EPA, and more. Landmark legislation like SARA (Superfund Amendments and Restoration Act) that create huge advances like the 1982 National Priorities List – an account of every abandoned hazardous waste site requiring EPA cleanup efforts – are left in the dust from budget cuts. Switching people from an anthropocentric to bio/eco-centric bias is key to securing global sustainability.

Although, it seems as though everyone has their own ‘Once-ler’ that takes the lead over a sustainable conscious. Aiding the environment isn’t a game of taking shorter showers or even increasing energy efficiency (though, installing solar panels is pretty great). Becoming environmentally aware is about realizing the magnitude of unsustainability we encounter in our everyday lives, and making an active effort to battle it. Simply saying “I won’t have an impact” isn’t going to halt the effects of melting ice in the Arctic or stop the development of schools atop abandoned hazardous waste sites…the difference we make as a society will be the collective effort of individuals.

The Lorax may have ended with a demolished society, and an uncertainty of what the future may hold. Honestly, I don’t know what the future will hold either. Though, what’s clear to me is that it’s not too late to reverse our current trajectory…when it’s all said and done, we’re the ones who live with the reality of what society has become. What will you do?